Did some work on ZX Spectrum 128 +3 I have. One thing was I wanted to make it work with small “TFT Color monitor” (for a car rear view). This monitor has a composite video input.

First I tried using CSYNK and GND signals for a composite video input. You get the video but it was terrible quality. It seems that “The 128 ZX Spectrums including the +3 (and +2A, +2B) have audio sound modulated onto the video, which reduces the clarity of the composite signal that is available at the modulator input.”(1).

Then I found this document – “Video fixes and video cables
for all ZX Spectrum 128K models”. There is a chapter on Creating composite video-out on a +2A / +2B / +3:

“Although the ZX Spectrum 128K heat sink model and the grey ZX Spectrum +2 have a composite video-out signal on pin 1 of the RGB connector, the ZX Spectrum +2A, +2B and +3 are missing this feature.
Instead of the composite video signal they have a dangerous 12V on pin 1 that will seriously damage your TV or monitor!
But you can add the composite video signal yourself, with the same fairly simple circuit as that is integrated on the heat sink model and +2.
The steps:
1. First remove the 12V from pin 1 by removing resistor R44 (should be the same for +2A, +2B and +3, and very close to the RGB connector).
2. Add this circuit:”

And here is the result:

Some notes I made watching The Spectrum Show.

If you are interested in retro computing, especially Sinclair ZX Spectrum computing, I highly recommend Paul Jenkinson The Spectrum Show if you haven’t found it yet.

If You are a little bit into retro computing and would like to experiment with ZX Spectrum computer outputs or make some extension board for it for some prototyping, then you need ZX Spectrum edge connector ( if we talk about original ZX Spectrums ). It is easy to make one by Yourself, just buy some regular 28x2P 56P 2.54mm 0.1″ edge connectors on ebay and saw off both ends of it so they could be used for ZX Spectrum, done. 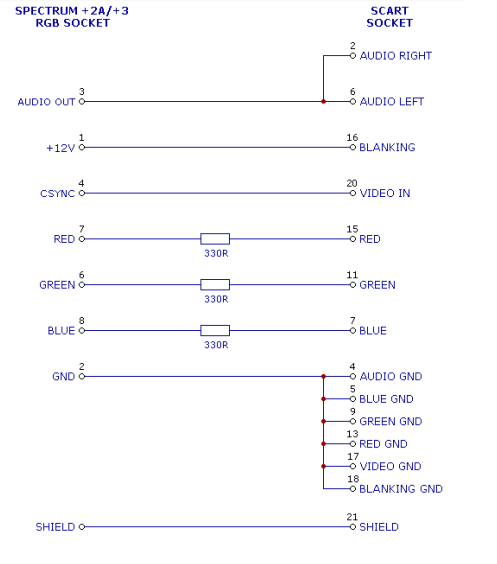 Got a somewhat cheap ZX Spectrum +3 to my collection. It was marked as untested in eBay ( they usually are ), but I took the risk and bought as the price was ok.  On first test it powered up, the floppy disk was providing sound, TV could be tuned and startup menu appeared. First noticed that some of the keys ( lower part ) were not working. My guess would be that membrane will have to be replaced but anyway, disassembly will show. And it showed. As it more or less was obvious from outside inspection – inside was dirty as hell.

Then, after some cleaning:

I have no CF-2 floppy diskettes to test, so decided to plug in a tape recorder and test some software from and audio cassettes and the i noticed.. that audio jack was missing! It seems that it was just cut away! Found similar one in one my spare parts box and soldered that in.

Also decided that as soldering iron is hot anyway why I would not just make a quick composite mod in the UHF box (using a capacitor). Did that, reassembled it, plugged it in and… yeah – no video.

So, I have undone composite mod, restored everything to original condition and started making RGB to SCART cable for it.

Good article from Your Spectrum magazine (1984) regarding methods of extending ZX Spectrum BASIC.

Purchased Interface 1 bis for the ZX Spectrum.
There are plenty information about it and installing and preparing SD card on manufacturers site https://sites.google.com/site/interface1bis/
But I have encountered a problem – could not start it and was allways getting “file not found” error.
Did all steps described in troubleshooting video https://www.youtube.com/watch?v=QYHhWQyVWAU
Loaded OpSys from PC using LOAD command, program loads OK. But when I do NEW and then RUN I get “file not found” error.
Solution I found was that I had to repeat all prepare SD card steps, but additionally had to add comparability with Windows 8 (and run as administrator off course) option (I was running Windows 10) to LDCSetup.exe and later to the ‘Prepare new card’ utility.

So, In short – add Windows 8 compatibility to Interface 1 bis utilities.

How to write ZX Spectrum games tutorial in English:
https://chuntey.wordpress.com/2012/12/18/how-to-write-zx-spectrum-games-chapter-1/

As recently I started tinkering with ZX Spectrum hardware, tested one old joystick I had. Up and right positions did not work during the games. Tested port reading with one simple program:

So, just took now DB9 female connector and soldered it instead of an old one that I have just cut away.