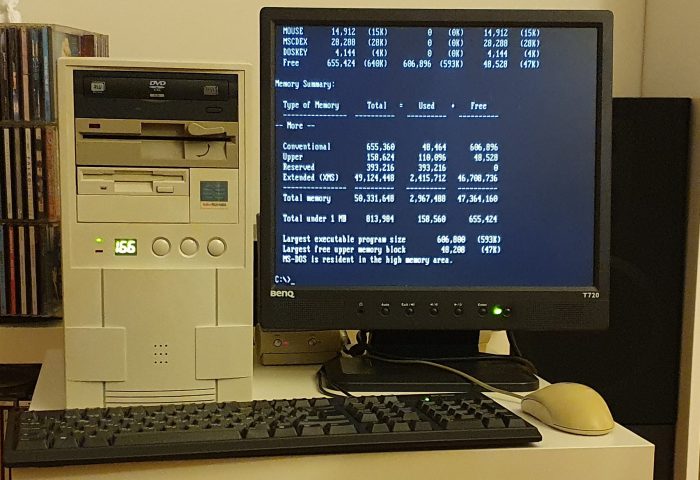 Recently I came up with the idea to build myself a newer retro PC from the ’90s, something like the first Pentium with DOS 6.22 and Windows 3.11. I have a couple of retro laptops running Windows 95 and Windows 98. The motivation was that I want to have a retro desktop PC with as many peripherals as I could get, mostly I was interested if 5.25 and 3.5 floppy disk drives.

As usual, without a hurry, I have started looking around on eBay to see what I could get there. I was quite surprised when I have found out that prices for PC parts of that era are quite high. Seems like the retro community is quite an active thing. When googling about some of the hardware, the most useful information I got was sites like https://www.vogons.org/ and http://www.vcfed.org/ and maybe a couple of other I don’t remember now.

My first acquisition was quite a nice TEAC FD-55GFR floppy disk drive. What caught my attention was that it is quite versatile and can work with double density and high-density floppy disks 1.2MB, 360kB, 180kB. According to VOGONS information, it is the most capable drive in the Teac FD-55 series. It can read double and high density, 80 tracks, 300/360rpm floppy disks.

Now I was missing just the rest of the everything else 🙂

Still looking around on eBay started to get a feeling what motherboard, graphic card, sound card, etc., I should get. But looking at various parts and PC cases I started to get an intuition that buying everything on eBay might get quite expensive, so I have decided to look around. One day I was driving near a scrapyard where electronics is recycled and decided to make a visit. And to my surprise, they actually still had two computers fully from that era and fully assembled with all the parts. Of course, they were looking terribly and nobody knew if anything inside works at all but still I decided to take my chance and took both of them for 20 euro each.

So this is first PC. I had no idea what is inside before opening it.

Regarding cleaning, I did what I have never done before — loaded all computer boards to the dishwasher! Then carefully dried everything with a hot gun and left to dry out overnight.

And now let’s skip the assembling process and go straight to the finished PC… Just have to mention that I did not have AT keyboard at the moment. PS/2 to AT cable is on its way. So what I did, I took 8 pin din plug I had, removed 3 pins, soldered a cable to this din connector and another end to PS/2 keyboard itself ( had to disassemble it ). So now this keyboard has 2 cables PS/2 and AT. It’s a quick hack made with things I had by my hand at the moment 😛

At the end build is

Some old 20GB HDD, only 8gb partition is used now.

Modifications, changes, and notes regarding this build.

Original CD-ROM was replaced with DVD-RW, works the same way in dos.

TEAC FD-55GFR works perfectly. I managed to format a couple of DD 360KB floppies I had laying around.

I have not managed to make Motherboard USB ports to work, not sure why. I have enabled USB in Bios settings, connected USB bracket to the motherboards USB pins, but no luck. So I have added a spare 5xUSB PCI card and it worked perfectly in DOS 6.22 using NJ32DISK.SYS and usbaspi.sys drivers.

On the other hand, I am really happy that this PCI USB card works and USB flash drives work under DOS, more convenient software transferring it is!

Add CF card ( or SD ) support, maybe use it as system drive. Idea is somehow to mount it below FDD so it would be easy to swap cards.

Fix this nasty crack on the front panel. Maybe fix it with some epoxy or something, have to think about it.